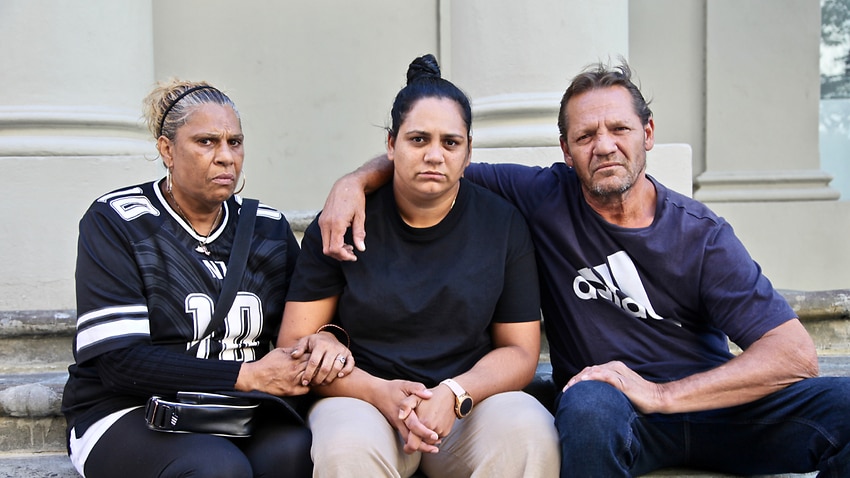 Police officers have been referred to as to answer an individual that was “suicidal” and at threat of being struck by a automobile.

First Class Constable Shaun O’Callaghan was amongst three officers that arrived at the scene round 7:37am and apprehended Ms Wynne within the center of the highway.

“When I first approached her and (placed) a hand on her shoulder…she said nothing. I could see she had some blood running down her arm and a swollen neck. She had a blank look on her face, as if I wasn’t there,” he informed the inquest on Wednesday.

The CCTV footage, taken from an elevated place roughly 50m away, exhibits the officers lead Ms Wynne off the freeway to a grassed space, the place they introduced her to the bottom.

On the facet of the highway, the officers nearly instantly rolled Ms Wynne face down onto her abdomen to handcuff her arms behind her again.

Sergeant Williams is scheduled to offer proof on Thursday.

While {the handcuffs} have been being placed on, the officers seen Ms Wynne was clenching a cannula needle that she had retained from the ambulance.

Once Ms Wynne was in handcuffs and the needle had been eliminated, police lifted her off the bottom. Ms Wynne was heavy and limp together with her head angling ahead, footage confirmed.

Police tilted her head again, observing she had glazed eyes.

“As soon as they lifted her up I could tell she was not breathing. I could tell there was something wrong,” Detective Constable Layla Boyd informed the inquest.

By that point, paramedics from the ambulance Ms Wynne had fled from had arrived and couldn’t detect a pulse.

Officers eliminated {the handcuffs} from Ms Wynne and rolled her onto her again earlier than each officers and paramedics started resuscitation makes an attempt.

The CCTV footage played to the court docket ends at roughly 7:42am, after which Ms Wynne is positioned in an ambulance and brought to Royal Perth Hospital.

A CT scan confirmed a extreme hypoxic mind harm. She was positioned on life help, by no means regained consciousness and died 5 days later.

Constable O’Callaghan defended the choice of police to place Ms Wynne face down on the bottom on her abdomen.

“(Her arms) being bloody and sweaty, she was quite slippery. We decided it was best to set her down and put handcuffs on her,” he mentioned.

He mentioned he didn’t observe Ms Wynne’s respiratory change into irregular throughout the incident, however couldn’t recall at what level throughout the restraint that she stopped transferring.

“She was breathing heavily like someone who had run, but nothing to make me think what was about to happen would happen.”

St John’s ambulance paramedics that attended the scene, additionally informed the inquest that they believed the drive utilized by police to restrain Ms Wynne was cheap.

Readers searching for help can contact Lifeline disaster help on 13 11 14, go to lifeline.org.au or discover an Aboriginal Medical Service right here. Resources for younger Aboriginal and Torres Strait Islanders will be discovered at Headspace: Yarn Safe.

We need to be vigilant towards counterfeit products: Nakul Pasricha,President, ASPA – ET HealthWorld